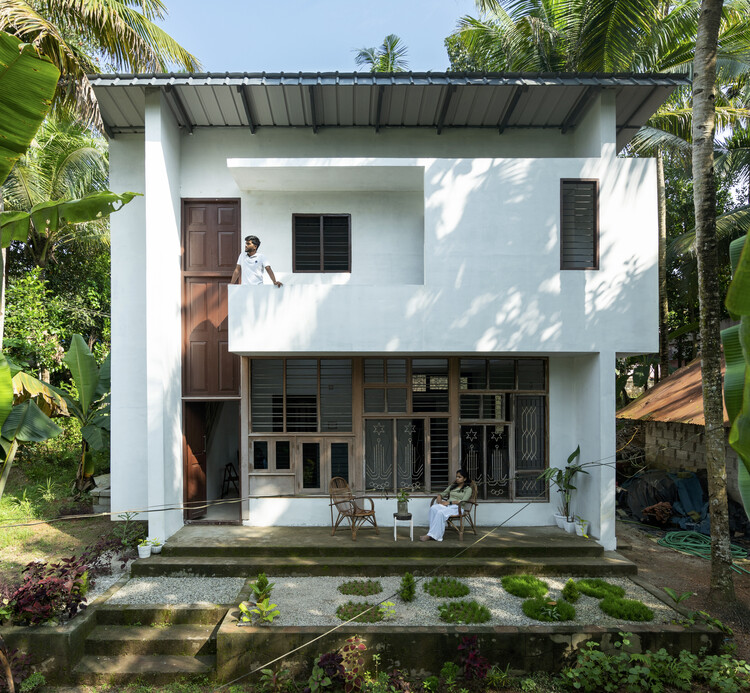 Text description provided by the architects. The clients are a carpenter, his wife who works as a house help, and two small kids. The requirements were to have  3 bedspace, two toilets, a living, dining, kitchen, and a space for religious gatherings. As for the materiality, second-grade interlocking mud blocks were re-sourced windows and doors/ metal sheet and concrete roofing. And the labor was undertaken by the owner who is a carpenter.

A home leftover was literally a home that was left by an organization that promised to economically support it and was hence created by leftover materials and in-house labor. The project commenced as a low-income house economically supported by an organization on land the clients owned. The design was planned for a 1200 sqft two-floored residence. Once the foundation was completed the support group withdrew, and the clients barely had the finances to finish 500sqft. Now the task was to keep the leftover foundation and come up with a new design substantiating the need for a three-bedroom house.

Sharing Across Projects – Ego Design Studio was working on the renovation of a high budget house in kowdiar, Trivandrum, Kerala when the project commenced, owing to the problems in the economy the office approached the client whose house was being demolished to support “a home leftover” by donating the wooden windows that were removed. The client (Mr. Sugathan) was extremely generous and provided the windows free of cost. The project was started on this support and then mode material donations were tried.

Financial Management, Material Donations – The house was built from leftover materials from construction sites and discarded materials sourced from building material industries by donors who were ready to support a low-income house.

Minimal Plan – The plan was a basic square with almost no interior walls. keeping the material quantity to a bare minimum.

Walls – The first thing was to source the materials at the cheapest possible rates. The walls were done with interlocking mud blocks sourced from building material manufacturers (BUILD UP) nearby, who provided us with their bricks free of cost.

Openings – The windows and doors were sourced from a demolition site free of cost. The only thing left was the materials needed for concrete, the steel for roofing, and the labor. The area of concrete was limited to half the floor area and the remaining was covered by metal sheets.

Labor – The client himself was a carpenter which took care of the woodworks needed, the remaining labor was procured by the support of his friends at base rates at times they were free or did not have work.

Now that the materials and labor were sorted out, the next question was “Why Should All Low-Income Houses Be Small Windowless Dark Cubes?”

Design decisions, The Site Context, And Present Home: The plain flat site was located away from the town and had no vehicular access, only a walkable road along its North side. The East face had lush green vegetation and paddy fields beyond it. Unlike all the other houses around, which faced the 4 feet walking track, “the home leftover” was designed facing this greenery (east) rather than the road. The site also had their old house which was a 15 ft x 15 ft shed with concrete block walls and a sheet roof. A dark single room block without any windows to accommodate a family of four (parents/ two children). The only source of light inside is the entry door and a TV inside.

The Design – The design was attempted in stark contrast to the space they already lived in. The dark one-room single-storied space was converted into an all-white double-height volume with ample openings. The front wall facing east was made into an all-window wall (a collage of windows collected from another renovation site), facing the lush green exterior.

Massing: The building was designed as a single large cuboidal volume with minimum walls, with the bedroom and toilet as a solid block on the ground floor, and the daughters’ room as a solid block on the upper floor, with interior balconies overlooking the volume and exterior facing the greens The inner void volume, accommodates their need for religious gatherings and caters to their carpentry related activities in the monsoons.

A HOME THAT EVOLVES: A home leftover was an attempt to create a shelter for a family who belonged to Low Income Group. The building was conceived as a skin that can be modified as and when the user needs and can also be expanded as they get financially stable. The architectural framework was given, the color and interior details are all decisions of the client, executed as and when time and resources permit. The involvement thereby helps them to feel ownership of the building.

So when one big-budget home is done, another family which cannot afford a house also gets a home, So every house becomes two houses…